"Pro/ENGINEER is so easy to learn..."

“…no wonder it is so popular with American students and teachers.” 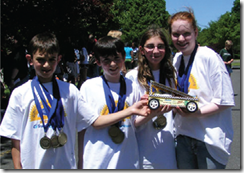 Each year, the NESEA – the Northeast Sustainable Energy Association – conducts the Junior Solar Sprint Program, where middle-school students from the north-eastern part of the United States design and build a model solar car for competition.

Well, we have found four of them:

Jennifer, Kaila, Chris, and Sean, from St. Joseph School in Mendham, New Jersey. Participating in the contest for the second year in a row, they have just won first place for documentation in the second round of the State Solar Sprint Model Car Competition – as well as placing in several other categories, and are now moving ahead to the regional competition held in Massachusetts.

These four students – all seventh graders – used the Student Edition of Pro/ENGINEER 3D CAD software to design and document their solar car, and here is their report!

Why Pro/ENGINEER is So Effective

Why did you choose Pro/ENGINEER?

Kaila: “Pro/ENGINEER is used at many schools in the US, and we had heard about it from fellow students before. When we joined the competition the first time, last year, the decision [to use Pro/ENGINEER] was made easy, since we were offered a free student version.” 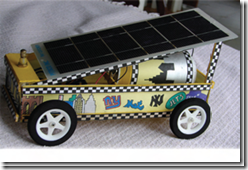 Did you find it easy to learn?

Sean: “Yes, totally easy. It took the Pro/ENGINEER tutorial and just a little bit of trial-and-error to get familiar with it.”

Added Chris: “Also, we had a mentor who supervised the project and helped us a little bit with the overall engineering terminology. But overall, we all believe that Pro/ENGINEER is well thought out and offers an organised interface.”

Tell us about the actual design process – what tools did you use and which helped you the most?

Jennifer: “We designed the whole solar-powered car with Pro/ENGINEER. We modelled and assembled the parts with the software and it was great to see how everything fit together. Having an Undo button was convenient,” she smiles, “but hardly necessary – since the software was so great and easy to use that we hardly made mistakes!” And: “My favourite were the patterning tools – it would have taken hours to create a gear without it.” 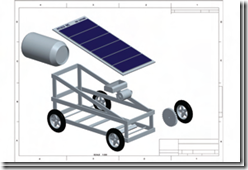 3D model of the car, designed with the Student Edition of Pro/ENGINEER.

Congratulations to our young [Pro] ENGINEERs, and good luck in the next round of the competition!

If you want to become a [Pro] ENGINEER, too, and learn how to use 3D CAD tools in your classroom, please direct your teachers to: www.PTC.com/go/schools