The Concept of Product Lifecycle

In 1931 Otto Kleppner developed a precursor to what we now understand as the basic product lifecycle where he suggested that products go through three stages:

The next reference was from a man called Jones who worked for Booz, Allen and Hamilton, and in 1957 he theorized that there was a lifecycle that is characteristic of most products and he put forward this terminology:

In 1959 Patton wrote that there was consensus that the key element of the product lifecycle was that profits are high during the growth phase and decline due to competition during the maturity phase.

How did these definitions of product lifecycle evolve to our current understanding?

As early as 1985 there was clear understanding that:

The currently accepted terms for product lifecycle today are:

So where does Product Life Cycle Management fit into this

PLM developed as a manufacturing tool for businesses seeking to maximise the advantage of bringing new products to the market first.

During the introduction stage of a product's lifecycle (PLC) there is very little competition, but developmental costs are high. Once the growth stage is reached, product volumes increase exponentially and it is at this stage that adroit manufacturers reap the major portion of their profits.

PLM aims to facilitate the process by allowing manufacturers to:

One of the first recorded applications of PLM was in 1985 by American Motors Corporation who were looking for a way to speed up the product development process of the Jeep Grand Cherokee.

The first step was the using CAD tools with the primary objective of increasing the productivity level of the draughtsmen. Accuracy and consistency was enhanced because drawings and documents were stored in a central repository in their database. This in turn facilitated the engineering change process with easy access to correct documentation, allowing quick and effective resolution of design errors.

This novel approach was so effective that when Chrysler purchased American Motors in 1987 they retained it, and this helped to make them the lowest cost American manufacturer in the next decade.

Today – the modern world of PLM

PLM is now the term is now used to represent the integrated set of software tools used in the design, review, and manufacture of products and product lines from initial conception, development, manufacture, distribution, to end of life.

As with the American Motors initiative, an effective PLM system is fully integrated using the same data and information for all transactions, and thus ensuring data integrity and the minimisation of errors.

Discover how you can make the right choice when implementing a PLM system. Download the guide to selecting PLM: 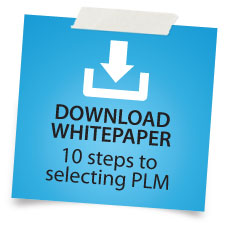